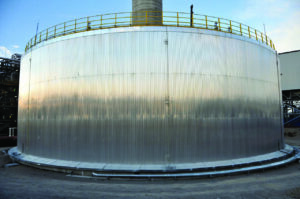 TES is a promising electrification strategy: Because TES can utilize low-cost renewable electricity – for example wind generated in the middle of the night – to produce and store heat for later use, TES provides utility-scale grid storage and helps manage renewables’ intermittency.

Similarly, TES can store heat captured by concentrating solar systems during the day for use during non-daylight hours.

There are various forms of TES technologies that are largely distinguished in terms of the energy sources they draw from, storage mediums they use, and the chemical or physical processes that underlie them. Most commonly, TES technologies store energy in liquids or solids via temperature changes without changing their state of matter. This process often involves converting renewable electricity to heat through common processes such as electrical resistance and storing heat for immediate or later use. Storage mediums include water tanks, molten salt, and materials such as volcanic rock, minerals, ceramic, or concrete. Other forms of TES technologies similarly draw on renewable electricity but store heat via changes in states of matter (e.g. freezing water), often for low-temperature applications in buildings, while other forms of TES technologies work via chemical reactions or by manipulating physical properties of fluids.

TES technologies have strong potential for cross-sectoral decarbonization, especially for heating and cooling buildings and providing heat for industrial processes. TES technologies can provide high temperature industrial heat (above 1,000°C) at extremely high efficiency using common materials that can store heat over long durations. Their cost-effectiveness is expected to further improve over the course of the decade, dropping by about 30 percent for industrial applications by 2030, according to the International Renewable Energy Agency. RTC sponsors Antora Energy, Brenmiller Energy, and Rondo Energy are active in the industrial and institutional spaces, with projects including a cement plant, a major plastics company, and a college campus.

What is the RTC Doing?

The RTC is conducting interviews, workshops, and panel discussions with key policy makers and thermal storage solutions providers to produce a Thermal Storage Technology Assessment. This document will provide key stakeholders a deeper understanding of the technical and economic potential for scaling thermal storage technology solutions in various industrial subsectors.

The RTC will also convene a Thermal Storage Working Group comprised of RTC members and sponsors, utilities, NGOs, and technical experts from research institutions. This working group provide input into the Thermal Storage Technology Assessment and create a Technology Action Plan and Partnership (TAPP) to identify the market, policy, and technology actions the RTC should take over the next three years to accelerate thermal storage deployment, with a detailed plan established for year one.

The RTC hosted a public webinar featuring our three sponsors that provide standalone thermal energy storage: Rondo Energy, Antora Energy, and Brenmiller Energy. These solutions decouple the availability of heat generated from renewable electricity, solar thermal, and other heat sources (such as waste heat) from when end users need it, bringing the decarbonizing of industrial processes and buildings into reach. Participants came away with a better understanding of how these systems work, real-world applications from thermal storage companies, and what the RTC does to support this promising technology. The webinar supported the launch of our Thermal Storage Working Group, open to all our members and sponsors, which aims to deepen understanding of the technology and to develop a plan to address barriers to its deployment and scaling.

Learn More About the Event 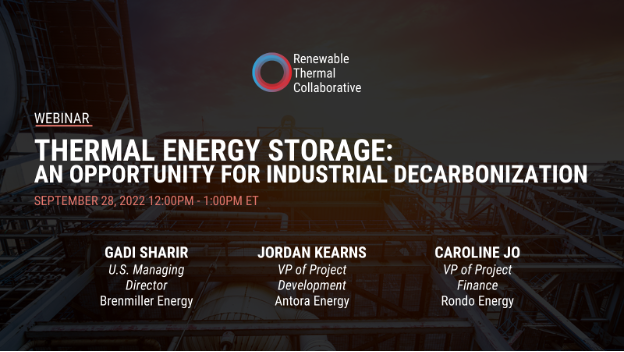 How to get involved:

These work streams are developed with and informed by our members and sponsors. We regularly convene focus working groups to collaborate on this work. To join us in driving forward renewable thermal technologies, become a Member or Sponsor of the RTC here.